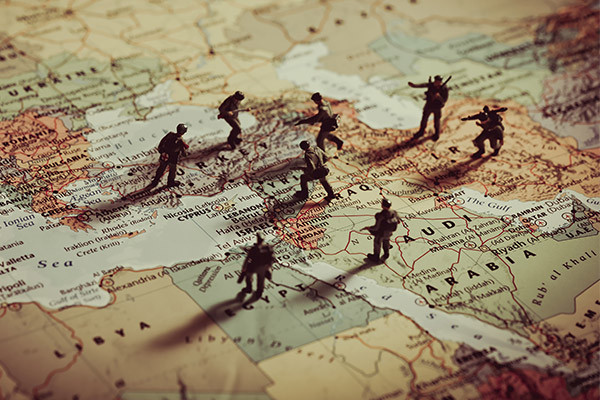 The situation in Lebanon was described as a catastrophic meltdown by many. The World Bank regarded this crisis as one of the worst economic crises that could strike a country. But even with this dire situation, the rich politicians would not give concessions, and the situation worsened until recently.

The situation in Lebanon was described as a catastrophic meltdown by many. The World Bank regarded this crisis as one of the worst economic crises that could strike a country. But even with this dire situation, the rich politicians would not give concessions, and the situation worsened until recently.

In Lebanon, one cannot miss that the formation of the government coincided with the US Congressional Delegation visit to Lebanon. During this visit, Lebanese political Elites were apparently motivated by the fear of being sanctioned by the US, a move The European Union threatened with last May.

Unlike Hezbollah or its leader Hassan Nasrallah, President Mischel Aoun, Prime Minister Najib Mikati, Speaker of the Parliament Nabih Berri, and others can't afford to be subject to such sanctions. They have considerable accounts in European banks. During protests in Lebanon, voices advocated for these corrupted Elites to be sanctioned and the money to be returned to Lebanon. Thus, it will not be surprising if this was the stick the US used to convince the politicians on the formation of this government.

Hezbollah knows if pushed to the corner, these elites will not endure the pressure. And that the compromise should be made. Even though Hezbollah allies are the ones who had to accept a deal and stop insisting on the blocking-third, at least on the surface, the most important allies are Aoun and Gibran Bassil, Aoun's son-in-law and subject to US sanctions for his corruption. Bassil most probably wondering if the sanctions would be lifted if he cooperated.

For Hezbollah that has hegemony over Lebanon with unmatched force and penetration of state institutions, nothing has changed. But this doesn't mean Hezbollah didn't need to end the political stalemate. Because even its Shiaa social incubator is suffering, and probably would not withstand another battle if the country collops and descend into a second civil war.

The carrot offered to Hezbollah, and by extent, Iran is allowing Egypt to provide natural gas to Lebanon via Jordan and Syria, even with Caesar sanctions is still active on Syria. This will not only solve the Lebanese electricity shortage but will also give Assad regime some of the legitimacy it once lost, with other Arab nations making deals with it -officially- and with American support.

After pulling the troops out of Afghanistan and the Patriot Missiles from Saudi Arabia, and other weaponry from Qatar, this could be a sign of another pullout from Syria (maybe Iraq too) while readmitting the Assad regime in the Arab league and leaving both countries to Iran's hegemony. This could also indicate another deal to allow Iranian oil shipment to enter Lebanon even without the US administration's public acceptance. It will not be the first time the US has agreed to turn a blind eye to Iran sanction violations.

The American involvement in Lebanon's political and economic crisis indicates an attempt to maintain stability. And that it is irrelevant who does the job. Like the Taliban in Afghanistan, the US seems to be at peace handing the key to Hezbollah and Iran.

The dilemma for Lebanon will still be the ban on export by Saudi Arabia over drug smuggling, which is known to be linked to Hezbollah's illegal activities and international drug network. Saudi Arabia signaled its continued rejection of what it perceives as legitimizing Hezbollah gripe on Lebanon. Arabia announced intercepting a new attempt of smuggling Captagon shipment by a group linked to Hezbollah.

This means Saudi Arabia is not yet ready to reestablish its economic ties with Lebanon or revisit sending its lucrative monetary aid as long as Iran controls Lebanon through Hezbollah militia and as long as other critical issues are not resolved, most notably the Yemen Crisis. Nevertheless, it is expected the newly established government will try to open negotiation with the Saudi government for its essential role in Lebanon's economy and as a source of foreign currency through export.

The Lebanese people are the losing party in this arrangement. Indeed, the formation of the government is most needed to stop the economic collapse, but the same corrupted elites stayed in power. As if they were not responsible directly or indirectly for the economic crisis. And as if the protests had no effect and the explosion in Beirut port has never happened.

After withdrawing from the Middle East, the new American policy would concentrate on putting a bandage on such a crisis. And the critical issue is preventing a boiling spillover which could require American interference, even if this policy leads to a growing Iranian role.

The new Lebanese government is a necessity, but it is not meant to make a change. Since the core problems are not addressed, another freefall will follow Lebanon and its neighbors sooner or later. The critical question is would the US be capable or around with a strategy-not merely a policy- to stop the freefall.

The keys to reading the UAE’s strategic map